Lucas here from 505 Games. Control pre-orders for PlayStation 4, Xbox One and PC went live today and we thought it would be a good idea to have a blog post explaining these in a bit more detail. This information will serve as an FAQ/guide explaining the various versions of Control, including exclusive items and rewards per platform, as well as exclusive bonus items you will get if you pre-order the game. To qualify for pre-order bonuses, players must purchase Control before it launches for physical and digital retail on PlayStation 4 and Xbox One, and digital retail for PC on the Epic Game store on the 27th of August 2019. So, let’s start: 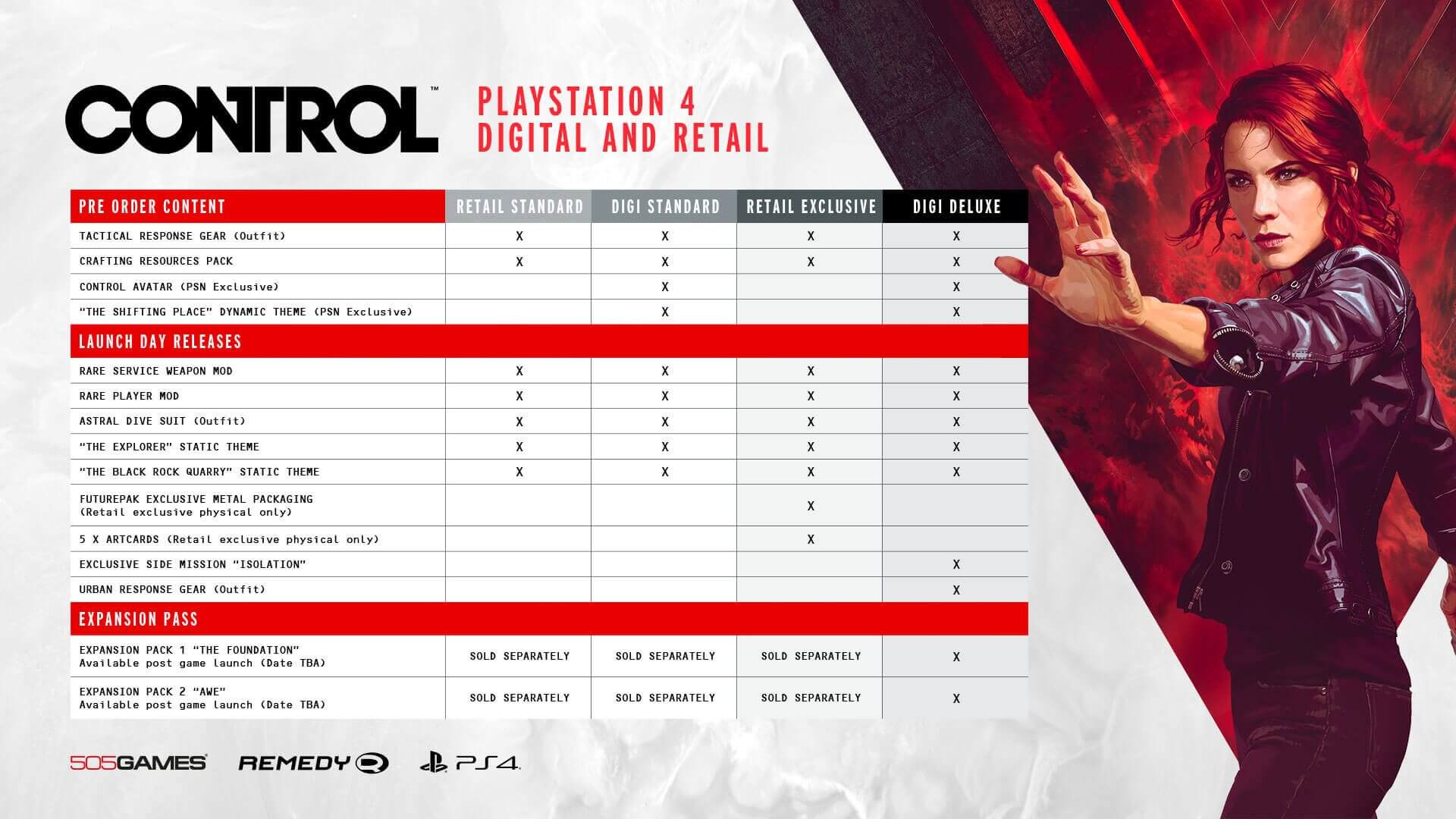 If I pre-order the game on PlayStation 4 what do I get?

As pre-order bonus items you’ll receive the Tactical Response Gear – a bonus outfit for Jesse – and a Crafting Resources Pack, which is a bonus supply of resources that Jesse can use to upgrade her abilities and the Service Weapon in the game (Jesse’s main weapon).

If you buy the digital version of the game on the PSN store, you will also receive a Control Avatar and “The Shifting Place” dynamic theme as pre-order bonus content.

When / How will I receive these extras?

If you are based in North America (SIEA) you will receive the theme and your Avatar as soon as you pre-order. The Tactical Response Gear and crafting resources pack will be provided on day of release.

You will receive these items automatically if you have purchased the digital version, or if you purchased the physical version you will need to enter a redemption code (provided by the retailer).

Can I purchase these items separately?

No, those items are only available for customers who pre-order the game; they will cease to be available when the game launches.

What other content do I get on the PlayStation 4 version?

PlayStation 4 customers will also receive (on day of launch) the following items:

Can I get these on Xbox One and PC?

No, these are exclusive to the PlayStation 4 versions of the game

What other versions are there?

Selected retailers will offer an exclusive physical edition of the game for PlayStation 4 that comprises of a special FuturePak metal packaging and five Control art cards. You will also receive the same pre-order extras included in the standard SKU if you pre-order this version.

The Digital Deluxe edition is exclusive to the PSN store. It contains all of the content from the standard PlayStation 4 SKU (and pre-order items if you pre-order the game). It also comes with:

This edition also comes with two separate Expansions releasing at a later date – “The Foundation” and “AWE”. Each Expansion will contain new story content and side missions, as well as new weapons and mods from the World of Control.

These Expansions will be available at a future date after the main game has launched. 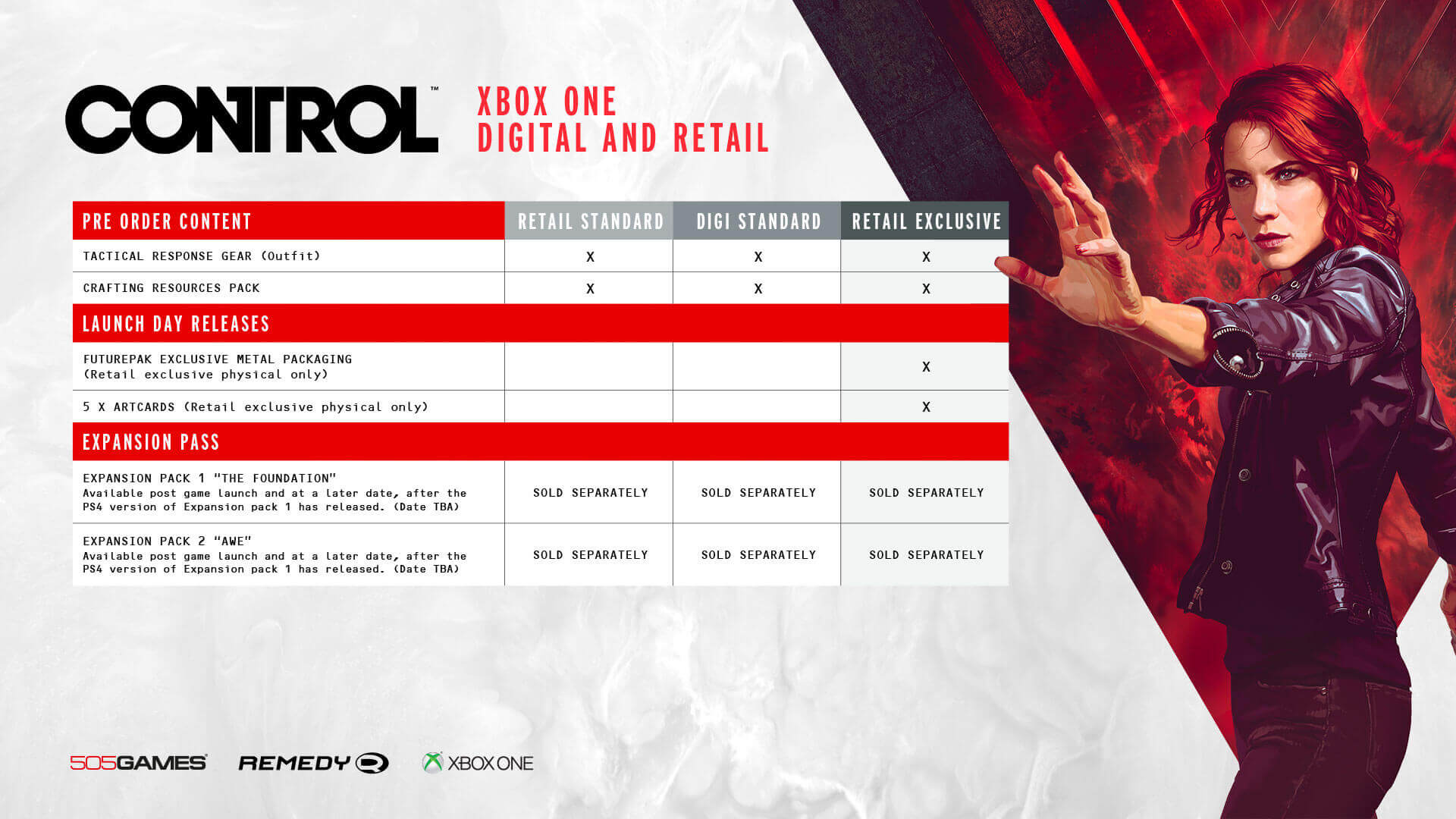 If I pre order the game on Xbox One or PC what do I get?

As pre-order bonus items you’ll receive the Tactical Response Gear – a bonus outfit for Jesse – and a Crafting Resources Pack, which is a bonus supply of resources Jesse can use to upgrade her powers and the Service Weapon in the game (Jesse’s main weapon)

When will I receive these extras?

As they are in-game content, they will be provided on day of release. You will receive these automatically if you have purchased the digital version, or you will need to enter a redemption code (provided by the retailer) if you purchased the physical version

Can I purchase these items separately?

No, these items are only available for customers who pre-order the game; they will cease to be available when the game launches.

What other versions are there?

Select retailers will offer an exclusive Xbox One physical edition of the game that comprises of a special FuturePak metal packaging and five Control art cards. You will also receive the same pre-order extras included in the standard SKU if you pre-order this version.

Where can I buy the PC version of the game?

The digital PC release will be available exclusively on the Epic Games Store for a period of 12 months. There are no plans currently to release a physical PC version of the game.

General Information regarding the pre-orders & expansions of Control:

Following the launch of the Control main game, we are planning to release two separate Expansions– “The Foundation” and “AWE”. Each will contain new locations, story content, side missions and new mods. These Expansions will be available for purchase as part of the Digital Deluxe SKU available exclusively on PlayStation 4, for purchase separately as an Expansion Pass with both Expansions bundled together for a special price, or as individual items.

The Expansion Pass and the individual Expansions will also be available for purchase on Xbox One and PC at a later date, after the PlayStation 4 Expansion 1 “The Foundation” has released.

Why are there two Expansions for Control?
We first want to say that everyone at Remedy Entertainment and 505 Games is fully focused on making Control as great as it can be, cutting no corners.

Once we ship the main game, we will get down to making the expansions and will take our time with them as we want them to bring new experiences to players. We know on a high level what the content will be, but will really get to it once Control ships. Let’s make the game great first.

We feel there is a lot we can offer to the world of Control post-launch. We will talk more about this at a later date.

Are the Expansions content that was cut out of the main game?
No. When you set out to design a game and a new universe, you come up with a huge amount of ideas, only some of which make it into the final project. This is for a variety of reasons, including schedules, technical realities, how everything fits into the story, and many other things.

In the case of Control, there is content we discussed early on but didn’t get to explore that we’re now planning to include within the Expansions, the content is not anything that has been specifically cut from the game to hold for later.

When will the Expansions be released?
The first Expansion:”The Foundation”, is planned to arrive late 2019 / early 2020. We will release more details about the Expansions including their release date at a later date.

What will the Expansions contain?
Each will contain new locations, story content and side missions, as well as new mods.

Can I buy the Expansions separately?
Yes you will be able to buy each Expansion separately. More details about this at a later date.

What is Rare Weapon Mod?
Players will use Weapon Mods to customize the functionality of Jesse’s Service Weapon. There are multiple categories of mods, such as Rare.

Will there be a Nintendo Switch SKU?
We don’t currently have plans for a Switch SKU

I hope the above has been helpful.

Analytical cookies are used to understand how visitors interact with the website. These cookies help provide information on metrics the number of visitors, bounce rate, traffic source, etc.

Performance cookies are used to understand and analyze the key performance indexes of the website which helps in delivering a better user experience for the visitors.

Advertisement cookies are used to provide visitors with relevant ads and marketing campaigns. These cookies track visitors across websites and collect information to provide customized ads.

Undefined cookies are those that are being analyzed and have not been classified into a category as yet.